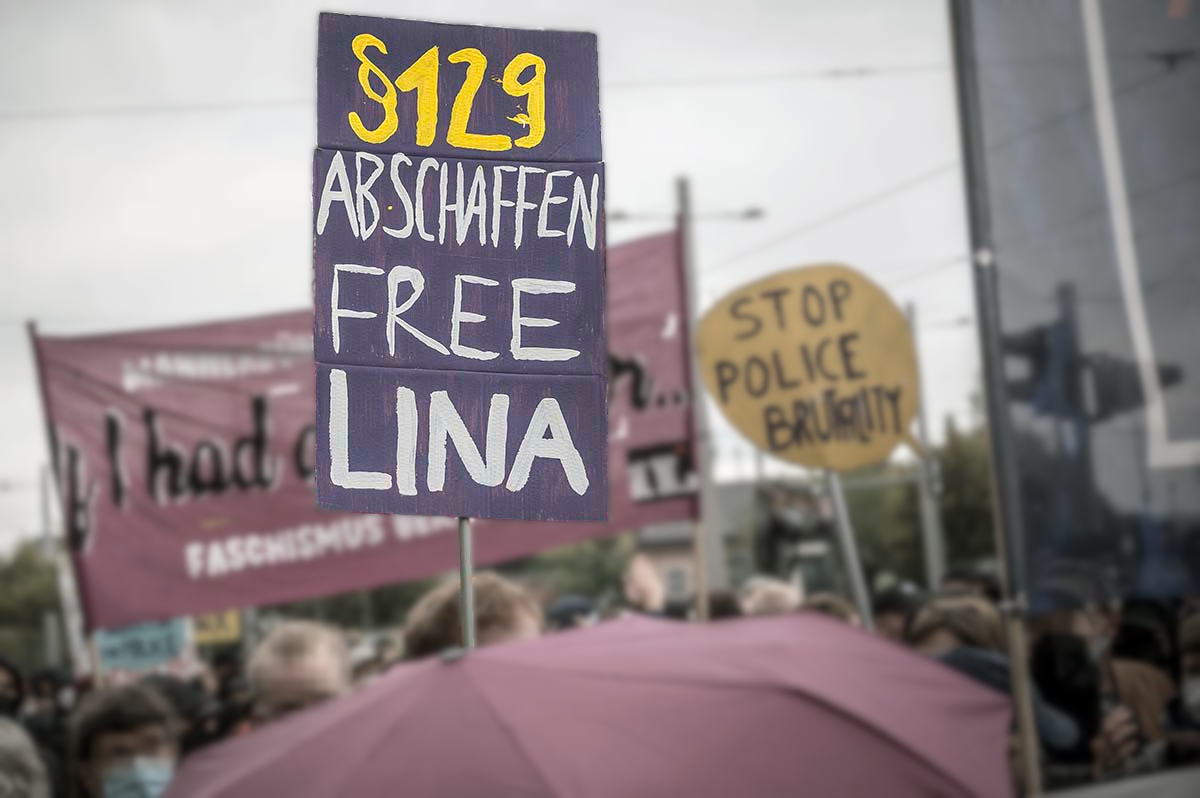 Verfassungsschutz (VS): Federal Office for the Protection of the Constitution – federal domestic intelligence service of Germany.

SOKO Linx: Special investigation commission by the LKA Saxony on “left-wing extremism”, founded in November 2019. Could not solve any cases until now and is therefore under pressure to justify its existence.

§ 129 – Supposed “membership of a criminal organization”.

§ 129a – Germany’s anti-terrorist law, the supposed “membership of a terrorist organization” justifies all the investigation methods of the state. Implemented in the 1970’s it is since then used traditionally against anti-authoritarians and revolutionaries to criminalize their activities.

Collective Thesis Paper against Repression – Down with §129/a

The starting-point of this text are the various complex proceedings under §129(a) that became known in Germany in 2020, as well as the state attacks on anti-fascist structures – from Hamburg to Stuttgart, from Frankfurt to Berlin, to Leipzig and Weimar.

In this text, we do not want to develop an overall social analysis, but rather to place the proceedings in a larger context of current repression. Our social analyses and resulting classifications are too diverse given the diversity of the different political currents and thus partly contradictory. We write this text – despite the political differences – as some suspects and solidarity-structures of different proceedings together, as a sign against repression:

It is the same cops and laws, in short, the same state that persecutes few to smash the ideas of many for
a better world!

Repression against leftist and revolutionary movements is nothing new and has a long history. The repressive authorities in Germany form a united front in the fight against them. Especially the Office for the Protection of the Constitution (VS), the Public Prosecutor General (GBA) or the Federal Criminal Police Office (BKA) belong to the repressive organs of the state, which have the task to maintain the existing order and to persecute all those who want to build a world free of exploitation and oppression. They thus directly defend the prevailing conditions with all their destructive effects.

The actors of state repression, however, do not act in isolation and for themselves, but are actively responsible for securing the domination that arises from the social and capitalist power relations. For a classification of the current, concrete repressive blows, it is therefore worth taking a look at the ongoing misery of the conditions:

Reactionary and misanthropic positions have become more consensual. Increasingly armed Nazis (1), together with everyday racists, have found a direct parliamentary expression in the AfD (largest far-right party). Thus, while reactionaries on the street dream of a coup d’état and collect weapons in preparation for it, the right-wingers are also organizing inside the authorities (2).

Repression against radical leftists and anti-authoritarians is always a means of maintaining the existing order. Emancipatory ideas that reject exploitation and oppression are therefore always the target of state attacks. This is particularly evident in relation to large mobilizations such as the anti-G20 protests. Especially before and after the G20 summit in 2017, numerous laws were tightened and police powers at federal and state level were expanded. In many places, the public was propagandistically sworn in to the „danger from the left“. Furthermore, the authorities claim a supposedly increasing willingness to use violence against people, as well as an increased potential for organization and mobilization. All this is interpreted as a threat to the existing order.

The various actors in the state machinery act in accordance with their priorities and tasks. In this context, it is clear that the various authorities sometimes have special priorities. On the one hand, the intelligence service (VS) has the task, in addition to intelligence surveillance and spying, of forecasting efforts that pose a threat to the state. In recent years, for example, it has been invoking a „left-wing terrorism“ (3) and „warning“ of an increasing escalation by „left-wing extremists“ to the point of „terrorist“ structures (4). This use of the term terrorism thereby serves the horseshoe theory of the state in order to maintain its monopoly on the use of force. Matching analyses are carried out by the Federal Criminal Police Office (BKA). Out of this network, the BKA and the public prosecutors‘ offices have the task of prosecution. Conversely, the cases brought against leftists and revolutionaries serve the authorities as evidence for their analyses, so one can speak of a self-fulfilling prophecy.

In the course of this, an emancipatory movement is overrun with major investigative proceedings under § 129 or § 129a. Their goal is to weaken the movement by spying on it, intimidating it, splitting it up, and in the long term to prevent the movement’s collective self-defense in a crisis-ridden social situation.

The state makes it clear that only political behavior that supports the state and integrates itself is tolerated and should be legitimate. The character of the repressive approach is embodied by the Federal Prosecutor General (GBA) (5) as an explicitly political actor. In order to come into its focus, it may be enough to think and act in a politically resistant manner. Among other things, the construct of supposed, particularly dangerous leaders attempts to create division and desolidarization within the emancipatory movement. Above all, through the demonization in the media and the reproduction of this by parts of society – but also by the movement – individual enemy images are to be delivered to the public and the necessity of our resistance is to be distracted from. The depoliticization created by this seems to be the real political attack on us, beyond imprisonment and legal proceedings. It is an attack on our contents!

So what can be our response in the face of the attacks of the state?

It is important that the proceedings and the „how to continue“ are not carried out in secret. On the basis of concrete cases of repression, it is possible to make our contents understandable to a wider public and to draw attention to the hypocritical policies of the rulers. There is no objective prosecution. The supposedly neutral „center“ and the state show their real character: we are dealing with political, ideological repression that has a clear goal. Thus, we believe that campaigns like Wir sind alle Linx, but also the trial information and solidarity escorting network Soli Antifa Ost (6) are important parts of a strategy that offensively deals with repression and aims at a broader resonance. In addition, it is of course important to organize actions, demonstrations, rallies and support in financial form. We believe that this is an open discussion in which the entire movement should participate and joint responsibility must be taken.

It is central to hold together and to build a cross-spectrum solidarity! The state and its organs attack in many different places, because they are concerned with the struggle against leftists and anti-authoritarians in general, no dogmatic distinctions are made by them. What unites us (across our differences) is the rejection of existing conditions and the perspective of overcoming these very conditions. Solidarity among ourselves rejects the categories of „guilt“ and „innocence.“ At the same time, it opposes the state tactic of division, through which emancipatory movements are either integrated and adapted or persecuted. For us it is clear that there can be no reconciliation with the existing conditions.

Our struggles are not defined in the categories of cops and courts, but have their expression in the daily struggle to overturn the existing conditions. We lead our diverse struggles for a world without sexism, racism, exploitation and oppression – for a solidarian society beyond capitalism! Beyond this communiqué of the solidarity groups it is important to expand the mutual reference and the cohesion in the future and to let it become practical:

We stand here and everywhere with our comrades* inside and outside the prisons!

Hamburg: In Hamburg, a §129a trial is being conducted against some alleged members of the Roter Aufbau, and a §129 trial against the group and all those who somehow count them as members. This culminated on 31.08.20 in a large-scale repressive strike against 22 suspects with 28 house raids and a media campaign. This was preceded by months of investigations with any authorities. Various actors are calling for a ban because, among other things, Roter Aufbau is said to have provided the infrastructure for the militant G20 protests. Since then, there have been isolated renewed house raids,collaboration/snitching and intimidation attempts such as stress at work , home visits, etc.. More info: https://roter-aufbau.de

Frankfurt am Main: Investigations under §129a are launched after an attack on a branch of the Federal Court of Justice in Leipzig on January 1, 2019. A house raid in Frankfurt follows 1.5 years later. Read more: https://www.129a.info

Antifa Ost Trial: In December 2019, five antifascists are arrested in the surroundings of Eisenach. They are accused of having attacked violent neo-Nazis of the martial arts group Knockout 51 around Leon Ringl. When the case came to the attention of the Federal Prosecutor’s Office and the SOKO Linx of the Saxon LKA, they took over the investigation. For the Soko Linx, which has so far not been able to solve any of the cases of autonomous urban politics for which it was founded, the case is just what they have been waiting for. They may now finally be able to deliver results, although thematically differently situated. Thus, together with the Federal Prosecutor’s Office, they construct a criminal organization, declare Lina to be the leader, take her into custody and try to charge the accused with a whole series of cases of practical antifascism in recent years, especially those in which a woman is said to have been involved. In six of these cases, because of the accusation according to § 129 and other smaller delicts, four persons are currently being tried at the Dresden Higher Regional Court. Further suspects are still under investigation by the Federal Prosecutor’s Office and the General Prosecutor’s Offices in Dresden and Gera. More information: https://www.soli-antifa-ost.org

Stuttgart: A confrontation with Nazis of the right-wing factory project „Zentrum Automobil“ on the fringes of a Antivax (Covid deniers and conspiracy theorists) demonstration is the trigger for a wave of repression in Baden-Württemberg. A total of 11 apartments are searched and the antifascists Jo and Dy are imprisoned. In September 2021 Jo and Dy are sentenced in a indication trial to 4.5 and 5.5 years in prison. The appeal against it as well as further proceedings against the other persons concerned are still pending. More info: https://notwendig.org